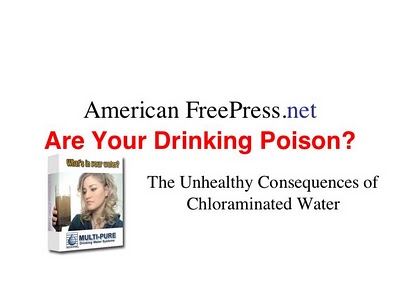 In order to meet standards set by the U.S. Environmental Protection Agency (EPA), municipal water districts across the United States are changing they way they disinfect public water supplies. In many cases this involves adding ammonia to chlorinated water to produce chloramines, or
chloraminated water.

While chloramination has been recommended by the EPA since the 1990s as a way to lower the level of carcinogenic disinfection byproducts (DBPs) created by chlorination, it has led to unintended consequences, in some cases making the water extremely toxic.

In the nation’s capital, for example, the change to chloraminated water in 2000 caused a huge spike in lead levels in the water. The chloramines reacted with antiquated pipes causing toxic levels of lead in some Washingtonians’ drinking water.

When Washington’s Water and Sewer Authority (WASA) switched from using free chlorine to chloramines to disinfect the water, serious problems with lead leaching started to occur. Lead levels were found in Washington’s water 3,200 times the EPA’s action level and 4,800 times the UN’s acceptable level for the toxic heavy metal.

The Washington Post reported in October 2004 that the D.C. Water and Sewer Authority knew in 2001 that its water contained unsafe lead levels, but withheld six high test results and said the water was fine.

While the Post article did not mention chloramines, it did say that other cities have similar problems dealing with unacceptably high levels of lead in their water:

Cities across the country are manipulating the results of tests used to detect lead in water, violating federal law and putting millions of Americans at risk, the Post reported. Some cities, including Philadelphia and Boston, have thrown out tests that show high readings or have avoided testing homes most likely to have lead.

In New York City, the Post wrote, “the nation’s largest water provider has for the past three years assured its 9.3 million customers that its water was safe because the lead content fell below federal limits. But the city has withheld from regulators hundreds of test results that would have raised lead levels above the safety standard in two of those years.”

The American Water Works Association (AWWA), an international nonprofit scientific society dedicated to the improvement of drinking water quality, reported that samples of Washington water collected after flushing were as high as 48,000 parts per billion (ppb). Some of the highest lead concentrations came from taps after one minute of flushing.

The EPA’s action level for lead in drinking water is 15 ppb, while the UN’s World Health Organization recommends that lead not exceed 10 ppb.
According to the EPA, If the lead concentration of the drinking water at the tap is above the action level, the water supplier may be required to install corrosion-control equipment, monitor the water source, and replace lead service lines, as well as undertake a public education program.

After switching to chloraminated water, children in Washington ingested more than 60 times the EPA’s maximum level of lead with one glass of water.

[Lead] contaminated water is a greater risk to youth, the EPA notes. A 2-year-old’s estimated daily intake of lead from all sources should not exceed 190 ppb per day, according to EPA guidelines.

In March 2004, after a number of 2-year-olds in Washington were found to have high levels of lead in their blood, D.C. City Administrator Robert Bobb said that 23,000 homes with lead service lines would receive filters
within 30 days.

Lead in the drinking water was a problem that plagued
ancient Rome. Vitruvius, Roman architect and engineer, warned of lead in his 1st Century B.C. opus De Architectura: Water from clay pipes is much more wholesome than that which is conducted through lead pipes, because lead is found to be harmful . . . hurtful to the human system. Hence, water ought by no means to be conducted in lead pipes, if we want to have it wholesome, Vitruvius wrote.

The chlorination of water also creates a host of known and unknown organic byproducts, which experts say are the chemicals of greatest concern due to their toxicity and carcinogenic potential. To reduce the level of harmful DBPs and the odor in the water, the EPA began promoting chloramination of water in 1994.

While the chloramines reduce the level of known DBPs, they create a host of unknown DBPs, some of which are extremely toxic.

In Corpus Christi, Texas, for example, where the water is treated only with chloramines, the reaction with the bromide and iodide laden source water creates some of the most toxic and genotoxic DBPs ever found.

Thee unintended generation of DBPs poses a chronic health risk, Dr. Michael J. Plewa, a genetic toxicology expert at the University of Illinois, wrote. Plewa authored a 2004 EPA-funded study of the effects of chloramines in the water of Corpus Christi.

Plewa told AFP that Houston’s source water is probably very similar to the water of Corpus Christi. Individuals who consume chlorinated drinking water have an elevated risk of cancer of the bladder, stomach, pancreas, kidney and rectum as well as Hodgkin’s and non-Hodgkin’s lymphoma, Plewa wrote. “DBPs also have been linked to reproductive and developmental effects, including the induction of spontaneous abortions.”

“I don’t want to sound glib,” Plewa said in an interview with American Free Press, “but we are participating in a vastly big experiment.”

The EPA is looking for an exit strategy from research on chloraminated water, Plewa said, while scientists are calling for more research about the toxicity of the halogenated organics, the unintended DBDs, in our drinking water.

Asked about a home water filtration system, Plewa said he and his wife, both veteran scientists, use a solid block carbon filter on the cold water intake for their kitchen in central Illinois.

The filter Plewa uses is about 10 inches long by 2 inches in diameter and requires a filter change every 4 months. The filter, which he buys from the local hardware store removes heavy metals, organics, and DBPs from his drinking water, he said.

In San Francisco, the addition of chloramines in February 2004 to the peninsula’s drinking water has provoked chloramine wars, pitting outraged citizens against the municipal water boards, The San Francisco Examiner noted last summer.

Chloraminated water kills fish and reptiles. When it was added to the San Francisco water supply it nearly had the same effect on some humans.

“I almost died,” Denise Kula Johnson of Menlo Park said the day after chloramines were added to her water supply. “I was in the shower and suddenly I could not breathe. I passed out on the floor. I was terrified.”

Leading the crusade against chloramines in drinking water is Winn Parker, a medical technologist from Milbrae, Calif.

“This is a national issue,” Parker told AFP. “The government is hiding the fact that the drinking water is not usable.”

The most at-risk groups from chloraminated water are, according to Parker: the fetus in the first trimester, children to age three, people over age 60 and those with human immunodeficiency virus (HIV). Women in the 35-45 age group are at risk of recurring rashes on the inner thighs and chest, he added.

Twenty years ago the use of chloraminated water in Los Angeles was found to be potentially lethal to kidney patients during dialysis.

The increased nitrogen in the drinking water, which filters don’t remove, can severely affect people taking medications for hypertension, breast cancer and penile dysfunction, Parker said, “The side effects are close to death.”

“The government is being its own bio-terrorists,” Parker told AFP. Every day Parker considers the health risks faced by the 180 million Americans who consume chloraminated water.

“We need to amend the Constitution,” Parker said, “to give the people in each state the right to vote on what goes into their water.”

Christopher Bollyn is a correspondent with American Free Press newspaper and has developed a following among truth seeks around the globe. He was recently voted one of the top 10 writers on the Internet by an informal poll of patriots.
FILTER YOUR WATER FROM CHLORAMINES WITH MULTI-PURE