Erin Brockovich, a consumer and environmental activist made famous by a movie in 2000, will talk to residents of the Country Club Estates neighborhood in DeLand. 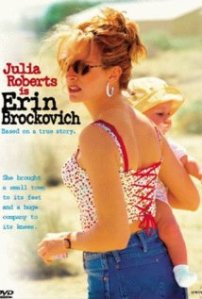 Earlier in 2011, water tests revealed unsafe levels of a pesticide called Dieldrin in more than 100 wells.Brockovich will host a forum Monday at 6 p.m. at First Assembly Church on Kepler Road.
Nationally recognized environmental toxic torts law firm Weitz & Luxenberg, P.C. and Morgan & Morgan, P.A., one of the leading personal injury and consumer law firms in the South, are set to host an Oct. 24 community meeting in DeLand, Florida, to address the concerns of residents over chemical contamination of local water supplies.
The meeting starts at 6 p.m. and will be held at the First Assembly DeLand Church, 551 S. Kepler Rd.
Erin Brockovich, the consumer advocate whose story was told in Julia Roberts’ Oscar-winning motion picture “Erin Brockovich,” will speak at the meeting about Dieldrin, the toxic insecticide that has been found in tainted wells in DeLand and in some Miami-Dade communities.
Brockovich currently is visiting people in affected communities on behalf of Weitz & Luxenberg, where she works as an environmental consultant. Longtime residents of these neighborhoods are concerned about the effects of Dieldrin on their property values and on their health.
Dieldrin is a now-banned toxic chemical compound that was used as a pesticide.  Dieldrin is considered to be a “persistent organic pollutant,” meaning it is difficult to purge from the environment and can accumulate in soil and water supplies.
Dieldrin contamination has been identified in the well water of communities in DeLand and Miami-Dade County. Local authorities have had to staunch the use of tainted well water by supplying filters and connecting homes to municipal water mains.
The Oct. 24 town hall meeting is intended to answer residents’ questions about Dieldrin and the impact that it may have on their property values and health

Multi-Pure Drinking Water Systems are NSF certified to remove hexachlorocyclopentadiene and Endrin which has the same molecular structure of dieldrin Click here and put in your coupon code 424948 for your special discount. Free gift offer with purchase. 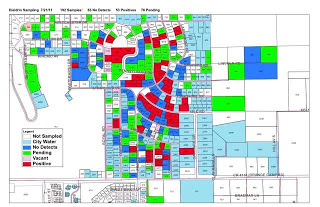 Property values for many homes among the sprawling oaks and rolling hills of the DeLand Country Club once easily topped $200,000 or even $300,000. But a double blow, first from the recession and then from the wrenching discovery of pesticides flowing in the well water, now leaves the homes valued at a fraction of their former worth.
The drama began unfolding this spring, after initial testing revealed high levels of dieldrin, a pesticide widely used until 1987. Of 192 wells tested, well water in 53 homes exceeds a level considered safe by the state of Florida, including at least three that exceed a much higher level set by the federal government.
Fear and anger grips many of those affected. Some consider leaving their homes. Others despair of ever being able to sell their homes. Others struggle to learn more about possible health effects, wondering if the chemical is to be blamed for dozens of cases of kidney and liver troubles and cancers reported among residents.

Earl Ziebarth says his contaminated well has him scared. (N-J | Dinah Voyles Puvler “You kind of get scared,” said resident Earl Ziebarth. As soon as his family learned the water in the home where they’ve lived for 12 years was contaminated, they switched to bottled water for everything, turned off the ice machine and began taking “much shorter showers.”
Local and state officials with the Department of Health say a lifetime of exposure to the contamination found in the private DeLand wells is unlikely to cause illness. While the risks may increase over decades of drinking the water, state officials say the state’s advisory level for dieldrin — .002 micrograms per liter is 100 times lower than the level set by the federal government. They say the level limits the lifetime risk of developing cancer from exposure to one in 1 million.
At the higher federal level, .02, which at least three homes in the Country Club area have exceeded, health officials say one in 10,000 people might develop cancer from a lifetime of exposure.
Still, given the concerns and the unknowns, values of several hundred homes in the neighborhood have been adjusted downward by as much as 50 percent, according to Volusia County property appraiser records.
The value of Ziebarth’s home, set at $317,417 in 2006 and at $166,330 last year, was recently adjusted down to $80,173.
“It is such a recent crisis, we felt like we had to make some kind of adjustment,” said Jan Cornelius, chief deputy property appraiser. “We used our professional opinion based on what we’ve seen in other damage situations.”
Levels matter
Minute variations in dieldrin levels make all the difference. Though neighbors suspect most of the homes have contaminated soil and water, homes with levels of dieldrin above the state standard in their water may receive free filtration systems from the Florida Department of Environmental Protection and, eventually, free hookup to city water. They are known as “reds” in the new neighborhood lingo.
On a colorful map being used by state officials to delineate pesticide levels, “light blues” already have city water and have not showered and washed dishes for years in possibly contaminated water. Greens still await test results.
“Dark blues” are considered “non-detects,” homes where pesticide levels are within a level considered safe by state officials. Those homeowners receive nothing, even though the level of pesticide in their water may be only one-thousandths of a microgram different from their neighbor. The tests, done at a state lab in Jacksonville, only detect down to a level of .0018.
State officials said they are prohibited by law from providing filters or city hookups for homes that do not exceed the state standard.
All of the 434 homes at the country club, no matter their test results, were reduced in value by the appraiser’s office. Homes with contaminated wells were adjusted down by 50 percent. Homes where dieldrin levels were considered safe were cut by 25 percent and homes with city water were adjusted downward by 15 percent.
“They’re still impacted by the negative aspects of this,” Cornelius said.
Searching for help
Ziebarth, a former state representative, is among several community residents who are helping organize and distribute information. He contacted consumer advocate Erin Brockovich, made famous in a Julia Roberts movie of the same name, and the national law firm for which she is a consultant, Weitz & Luxenberg.
On Tuesday, Robin Greenwald, chief of the law firm’s environmental toxic tort practice, confirmed she and Brockovich will travel to DeLand in August to meet with residents.
The state paid for installation of a carbon filtration system in the home where Ziebarth’s family has lived for 12 years and they are awaiting their free hookup to city water. But Ziebarth has become a champion for the “dark blues” or “non-detects” because he said the state protocol seems unfair.
He traveled to Tallahassee last week to meet with officials from the departments of health and environmental protection to plead for help in the neighborhood. On Thursday, he appealed to the Volusia County Council. He would like to see help for everyone, not just homes where the pesticide is documented above the state threshold.
During remarks at that meeting, Councilman Andy Kelly said residents who live next door to contaminated wells fear that a well that tests negative one day could test positive the next.
The environmental protection department began a site investigation last week, which could take up to a year, to try to determine the source of the contamination and how far it has spread, said spokeswoman Lisa Kelley.
The state is first looking at the characteristics of the shallow layer of groundwater beneath the soil, Kelley said. So far, no soil or air testing has been done, officials said, but soil testing could come later.
Dozens of neighbors already have signed on to a class-action lawsuit filed by DeLand attorney Joshua Gale, who works with an Alabama-based law firm that tries high-profile environmental law cases. That lawsuit alleges dieldrin-laden water used to treat the turf grass at the country club contaminated the aquifer that supplies water to homes in the area.
Attorneys say that case — against Shell Chemical and the operators of the DeLand Country Club golf course — could eventually be valued at more than $5 million.
Ziebarth and others, however, wonder if the homes and the neighborhood could have been contaminated by the termite treatments required by law before each home was built.

Property value adjustments
Selected value adjustments in Country Club Estates homes with contaminated wells: (Street numbers have been omitted)
Larchmont Drive
2010: $166,275
2011: $77,093
Stratford Drive
2010: $141,522
2011: $64,665
Yorkshire Drive
2010: $140,119
2011: $67,973
SOURCE: Volusia County Property Appraiser’s Office
More on Dieldrin
Dieldrin was banned for all uses except termite treatments in 1974 and banned for even termites in 1987.
Human health effects:
Officials say adverse health effects are not expected with the levels found in wells at the Country Club because “safe” levels are set many times lower than the “no-effect” level.
Human impacts of drinking contaminated water are unknown but risks do increase with length of time a person drinks the water.
Animal effect studies:
— Show high levels of exposure causes liver cancer in mice.
— Show contaminated surface water affects central nervous systems in fish and causes reproductive problems.
Developments:
As of July 21:
— 13 homes have filters installed at $1,500 each.
— 17 homes await filter installations.
— 5 homes are in the process of being connected to city water.
The state:
— Recommends contaminated wells be abandoned, not even used to water lawns.
— Is paying for the city of DeLand to install a new water main down Yale Road and possibly other streets.
Volusia County:
— Discussing possibility of creating a 10-year special assessment district to raise money to connect the entire neighborhood to city water.
— Working with city to determine possible boundaries.

To find out more about Multi-Pure Drinking water systems click here or call me Carole Allen at 386 437 7019
Our company has been in business 40 years, our systems have a lifetime warranty and we have been recommended by Consumers Digest as a Best Buy.

Protect your family with a Multi-Pure carbon block drinking water system
Click here and put in your coupon code 424948 for your special discount. Free gift offer with purchase. 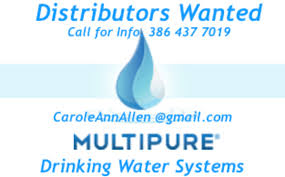